Buying snow guards is not as easy as some may think. There are several types of snow guards on the market today. Several factors need to be considered when you purchase snow guards for your roof including snow load, roof pitch, and roof style. What follows is a quick menu to our Snow Guards Shop where you can choose from our collection of clamp on, mini, and panel valley snow guards. Learn How to Buy Snow Guards in this section:

All Snow Guards
The face is a snow guards primary feature as it is where the stopping power is derived. We offer one of the best collections of snow gaurds on the web! On our site you can find every type of snow guards you may be looking for. Also be sure to read the rest of this snow guard buying guide.

Clamp On Snow Guards
Clamp on snow guards are a good option for those who have a standing seam metal roof. It is the most popular kind of snow guard. This type of snow guard does not penetrate the roof, but is attached mechanically giving it a lot of holding strength and can be attached during any season. Check our shop for both metal and plastic snow guards.

Pad Style Snow Guards
Panel valley snow guards offer an option for roofs where clamp on snow guards will not work. These offer two styles of attachment methods. Adhesive attachment that does not penetrate the roof, and mechanical attachment that can be done any time of the year. Check our store for both metal and plastic snow guards for valley panel roofs.

For home owners and contractors who are new to snow guards it is always best to consult with a professional who has experience installing snow guards. By consulting with a professional you can ask questions and get tips that you may not have originally thought of. It is also very important to truly understand the type of roof you are installing snow guards on. Some roofs that appear to be a standing seam metal roof are not truly standing seams, batten roof systems are often mistaken this way.

When choosing snow guards, the main question you should certainly NOT be asking yourself is, "How can I get away with the least amount of snow guards?" You need to be aware of the fact that you should not just place snow guards over door entrances and garages, but that snow guards need to be placed on the entire length of the roofing system. Sometimes you can get away with using fewer snow guards if you have a break in the levels of your roof, but it is truly best to place them on the entire roofing system. Your home is an expensive investment and using proper snow guard calculations can save you a lot of head aches.

What style is my metal roof?

The style of metal roof you have, will play a big part in selecting the type of snow guards you need. Here are some common metal roof style profiles: The standing seam metal roof is a great candidate for the clamp on style snow guards. With the other styles of roofs, you will want to get a panel snow guard.

How many snow guards do I need?

A couple things to keep in mind here are the steeper the pitch, the more snow guards you will need and the smaller the snow stops the more of them will be required.

What is my roof pitch? 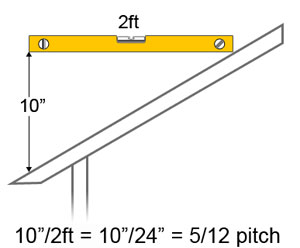 Roof pitch is often spoke as two numbers. When you here someone say, "My roof has a pitch of five twelve" this means there roof rises 5 inches for every 12 inches it runs. In more simple terms, if you start at point A and move to point B one foot away, you will be 5 inches higher. You can determine roof pitch either on top of the roof or on the bottom.

Determine roof pitch on top of roof:
Use a level marked at 12", hold it level and then measure the distance between the roof top and the mark on the level. If it is 5 inches, you have a 5/12 pitch.

Determine roof pitch below roof:
Use a level marked at 12", hold it level and then measure the distance between the roof bottom and the mark on the level. If it is 5 inches, you have a 5/12 pitch. This method can be down on a rafter, the underside of your attic, or on the end of our home. It is also a little bit safer because you do not have to stand on the roof to measure the pitch.

How much am I willing to pay for snow guards?

What is my skill level?

When installing snow guards, there are a couple of different skill levels to consider: 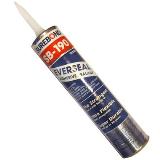 SureBond 190 Adhesive
With the advancement of adhesives over the last few years, adhesively attached snow stops have become more and more reliable. When used properly and according to manufacturer specs, using an attachment adhesive such as SureBond-190 will ensure that your snow guards will not fail.

If you are still skeptical about using an adhesive, you can always use screws and attach the snow stops to the roof mechanically. One advantage of using an adhesive over mechanically attached, snow guards is that if a freak snow storm occurs and your snow guards need to give way because a snow load is just too much, adhesively attached snow guards will give way with a lot less damage to the roof. They are also able to be reattached when the snow melts and you find them all in your front yard.

I have an EPDM rubber roof, can I use snow guards?