Jack McMullen, father of Brion P. McMullen (President & CEO of SnoBlox-Snojax), invented the first, clear, polycarbonate snow guard. His first prototype he developed in 1976, which later became known as the Snojax I in 1979.

Metal roofing has only been around since the 1980s. Who knew that the injuries and property damage associated with snow falling from metal roofs today would need such an innovative and unique product. As free floating roofs became more popular, Brion and his father recognized a need for a snow guard that could be attached to a metal roof using adhesive, but still be just as effective in keeping snow from sliding off the metal roof.

This new idea required a compatibility upgrade from the original Snojax.  The first prototype is known as the Icejax, which later became known as the Snojax I. As they continued to develop and perfect this design model, they name changed to Snojax II. With this “original” idea, the Snojax II earned its own U.S. patent for being the first adhesive mounted, polycarbonate snow guard.

What made and makes this snow guard / snow stop unique to the industry?

Since the year 2000, SnoBlox-SnoJax has developed a variety of snow retention devices and ideas that are widely used today. 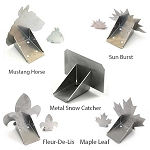