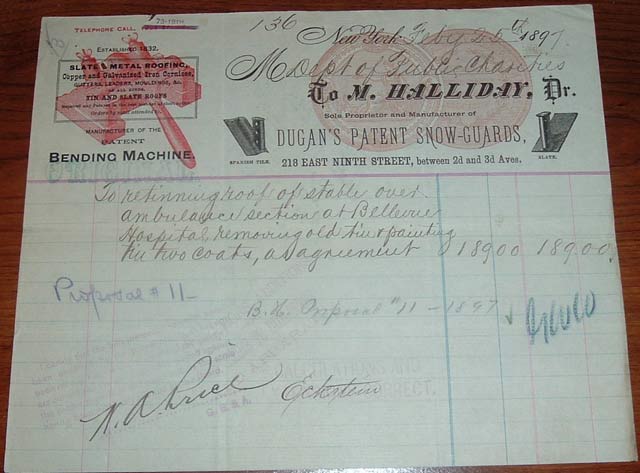 Check out this bill of sale for Snow Guards for Dr. M. Halliday that was issued on February 25th 1897. Snow guards have been around A LONG time. It's been exactly 114 years and 1 month since Halliday billed for his invention of the snow guards. I love how the address of this company points out the obvious , "between 2d and 3d Aves". A few years after the snow guards was invented, Charles G. Halliday, M. Hallidays son, bought out his fathers roofing business and continued pratice as a Slate and Metal roofer. He also continued to manufacture the snow guards for slate and slanting roofs.

The building that the Halliday's put snow guards on was the historic Bellevue Hospital in New York. This building is still standing today.

Wow! Is that really that long? But what was the original design of the Halliday’s snow guard? How does it really look during that time?